The livery stable has a number of coache types in use, wich we will describe here for you 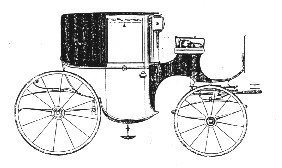 Coupé, a two-person carriage suited for marriages, in early times you could see a doctor driving in it towards his patients.
We have three: two painted white and one is half white, half black. Coupé means cut off and the coach is on the front side shorter than on the rear side: the seats in front of the door haver been left out.

Following carriages in a marriage procession are often: Berlines, a closed square coach with five windows: in both doors, two in front of these and a window on the front side, besides there is only a very little window in the rear. Are there also windows behind the doors, than it is called a glassberline or glasscoach. But that type is not present in the collection of this livery stable. Because of its solid panels, often nice decorated inside Totaly there are eight of these coaches 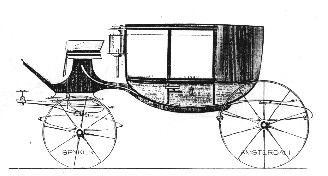 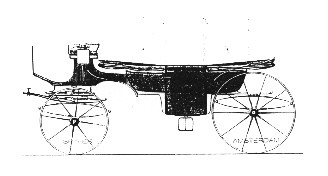 Landau. Has two leather roofparts, that open towards the frontside and back of the coach, so it is an open carriage, useable for trips and summer-driving. Starts it to rain suddenly than the roofparts can be closed. Only in the doors are windows, these windows can, just like in all the other coaches, be opened by letting them sink with a leather strap inside the door.

Because the Landau , by the lack of frontwindows, is rather dark inside and offers but a small view to the outside world, one did design the Glasslandau here the front roofpart heas been replaced by een solid wooden frameconstruction with glasswindows in it that can be folded under the driver seat. Most of the time, the front part stays upright, because it gives shelter against he wind.

There are Sefton (canu)- and Shelbourne-landau (square under the doors) and a type in between. Here there are three Glasslandau, the foundation has of each type one and one original Landau.

The Creme Caleche, with palfreniers seat. Ours is a transformed landau, not a real different type.

To conclude: there are the Breaks, with seats in the lenght direction of the coach and the door at the back side.

Of these we have three totally different ones: The open trainings break, for breaking in horses (4 persons), the open "Jan Plezier" without windows , which can transport 16 persons. And the last: the Glass Omnibus break, a closed coach for 10 persons for travel of for marriages following. All original.